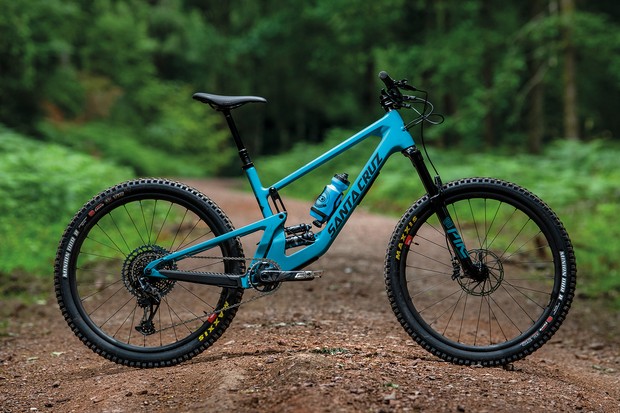 More composed and capable than ever, but still tons of fun. This build certainly isn’t cheap though

Cons: Not quite as playful as its predecessor; this build is seriously pricey

Santa Cruz has been working through its full-suspension line-up methodically, giving each bike a dramatic makeover. This time, it’s the turn of the 5010.

While its silhouette now resembles that of the Nomad, Bronson, Hightower, Heckler, Megatower and Tallboy, there are plenty of differences to be found on the trail.

The 5010 still rolls on more playful-feeling 650b wheels but Santa Cruz has stretched it out, giving the large size a reach of 475mm, compared to 460mm on the older version.

It’s also relaxed the head angle, to 65.4 degrees (low setting), and made the seat angle significantly steeper (76.8 degrees). The bottom bracket (BB) height has been raised slightly, to 334mm (low), because Santa Cruz no longer offers a full build with 2.6in tyres (though the 5010 will accept them).

A flip-chip at the base of the rear shock lets you change the head angle by 0.3 degrees, seat angle by 0.4 degrees and BB height by 4mm. The effective chainstay length now grows as you go up the size range, to better balance the rider between the wheels, from 424mm on the XS to 433mm on the XL (low).

With a shift in shock position – it’s now horizontally-mounted and driven by the lower of the two VPP links – Santa Cruz has altered the 5010’s suspension kinematics, making the 130mm of travel more progressive and capable of working with either an air or coil shock.

Another detail is the use of SRAM’s new Universal Derailleur Hanger (UDH), designed to potentially save the rear mech in the event of a crash.

Currently, the 5010 only comes in Santa Cruz’s ‘CC’ or marginally cheaper ‘C’ carbon (which goes some way to explaining the lofty prices) and there’s no alloy option.

This CC X01 RSV model is the top-tier offering, with a price tag to reflect this. The RockShox fork and shock (a Pike and Super Deluxe, respectively) are the brand’s fanciest ‘Ultimate’ offerings.

Inside the fork is the impressive Charger 2.1 RC2 damper, which has plenty of useful external adjustment (high and low-speed compression plus rebound damping). SRAM also supplies its G2 brakes, which offer enough punch and power for the type of riding the 5010 is designed for.

You also get Santa Cruz’s Reserve 30 carbon rims on DT Swiss hubs. If you’re keen on the build but not the price, it offers the same set-up minus the carbon wheels for £1,100 less. 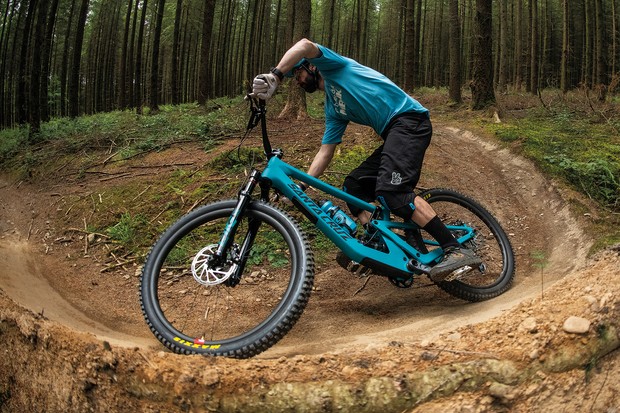 The 5010’s sharp handling makes it fast and a lot of fun.

Santa Cruz supplied my 5010 with a handy set-up guide, detailing recommended fork and shock pressures and settings. While the spring pressures worked well for me, I did need to add a little more rebound damping. Aside from that, getting the 140mm-travel fork in sync with the 130mm back-end was incredibly easy.

A taller head tube (and it is tall, at 150mm on the large) and an increase in fork travel bump the front end of the 5010 up a little, compared to the previous version. Thankfully, Santa Cruz leaves plenty of the fork’s steerer tube available so you can shift the stem up or (in my case) down to get the perfect bar height.

On the climbs, the 5010 responds energetically to pedalling and when you’re putting the power down, the back-end behaves impeccably, with next to no unnecessary movement through the suspension as you make your way up the hill.

That steep seat angle and the roomy effective top tube (617mm on the large) help to create an efficient riding position too. And thanks to the massive 52t sprocket on the new X01 Eagle transmission, it feels as if almost any climb is possible.

As you begin to descend, it becomes clear just how the 5010 has changed. The stretched-out geometry is certainly a contributing factor to just how capable the new bike is compared to its predecessor, especially as speeds pick up. It encourages you to go fast, and while the suspension can handle its share of abuse in the really rough stuff, successive heavy impacts will soon remind you that there’s just 130mm of travel on tap.

Yet while the new 5010 isn’t quite as restless or fidgety as the old bike, it’s still an easy bike to throw around and remains a serious amount of fun on the trail. The taut, responsive feel through the frame makes for ridiculously sharp handling, and it feels quick and easy to zip from turn to turn or loft the front wheel up and over anything that gets in its way.

Yes, this particular model costs a lot of cash, but there are a number of cheaper builds available and I’ve no doubt they’ll be just as grin-inducing as this one.